The investigation of magnetization dynamics underpinning domain wall motion in one-dimensional conduits, has been a very active research topic over the past two decades. Reports first considered motion under magnetic field, later under spin-polarized current. Experiments have been performed nearly exclusively on thin-film conduits, for ease of fabrication and inspection. This allowed a clear understanding of the physics at play, and went up to demonstrators of a flat race-track memory. In parallel, theory has predicted peculiarities in cylindrical nanowires, with new topologies of domain walls. In particular, one expects that the so-called Bloch-point wall is not subject to Walker-type instabilities, and should allow one to reach the magnonic regime for domain wall motion.

I will present emerging results of magnetization dynamics in such systems. These have been performed based on nanowires made of electroplated soft magnetic materials, with diameter in the range 100-150nm.

Motion under magnetic field may give rise to the dynamic change of topology of domain walls, from Bloch-point type to transverse type, in contradiction with the theoretical predictions. FIG1 illustrates this, featuring a tail-to-tail DW in its thin section. The experiments are partly reproduced by micromagnetic simulations. These results partly put at stake the existing knowledge on such walls. 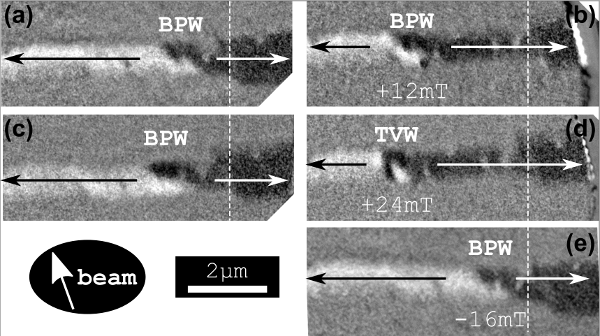 FIG1. XMCD-PEEM views under zero magnetic field of the shadow of a 140 nm-diameter Fe20Ni80 nanowire. Arrows stand for magnetization in the domains, and the vertical dotted line indicates the diameter modulation. a)-b) and c)-d) are two sequences initialized with a BPW followed by the application of a quasistatic field with strength 12 mT and 24 mT, respectively, as indicated in the final image. e) follows d), after application of -16 mT.

Motion under electric current highlights the crucial effect of the OErsted field, an ingredient which had been overlooked in most theoretical works so far. We show that the Oersted field stabilizes Bloch-point domain walls, and selects the sign of their azimuthal circulation. We moved such walls under current, at a speed exceeding 500m/s (See FIG2). Experimental results are reproduced quantitatively using micromagnetic simulations.